From Wikimedia Commons, the free media repository
Jump to navigation Jump to search
Translate this page
Other languages: 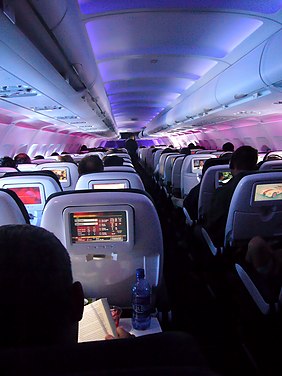 This photograph is acceptable as the copyrighted images appearing on the screens are de minimis.

De minimis is a Latin expression meaning about minimal things, normally in the locution de minimis non curat lex ("The law does not concern itself with trifles"). De minimis use of a copyrighted work is such a trivial use that the consent of the copyright owner is not required.

In some cases Commons files with copyrighted content considered acceptable as de minimis may be identified with the template {{De minimis}}. (However, the vast majority of such files are not identified in this way.)

The Common Law concept known as de minimis is derived from the maxim de minimis non curat lex, often translated as "the law does not concern itself with trifles". Some technical breaches of the law are considered to be so trivial and inconsequential that a court may decide that they should not be treated as breaches at all. The concept applies to many branches of the law, but here we consider its application specifically to copyright law.

If proved in court, de minimis can be a complete defence to a copyright infringement action. It is not simply that an infringer can get away with some things without much chance of being sued due to the high cost of litigation; rather, that if the copying is de minimis the copier is not in fact breaking the law at all.

A copyright-protected movie poster in the background (promoting "The Dark Knight") as part of a street-scene.

However, if the poster is entirely incidental to the overall subject-matter of the photograph, the copying may be considered de minimis (perhaps the poster takes up a small, insignificant part of the image, is entirely out of focus compared with the main subject, or is largely hidden in the background). In other words, a court would not be quick to uphold a claim of copyright infringement just because a photographer happened to include accidentally and incidentally a copyright-protected poster.

In determining whether the copying was sufficiently trivial, the court will consider all the circumstances. So, for example, if the poster forms an essential part of the overall photographic composition, or if the photograph was taken deliberately to include the poster, there is likely to be copyright infringement, and it is no defence to say that the poster was 'just in the background'. If the existence of the poster was the reason the photograph was taken in the first place, copyright infringement cannot be avoided by additionally including within the frame more of the setting or the surrounding area.

If the existence of the poster makes the image more attractive, more usable, or liable to cause more than insignificant economic damage to the copyright owner, then a de minimis defence to a copyright-infringement action will probably fail.

A useful test may be to ask whether the photograph would be as good or as useful if the poster were to be masked out. If no, then it is difficult to argue that the poster is actually de minimis, even if the poster is small and is "in the background".

Variations in laws and in uses of works mean that firm rules are not possible. As a general guideline, however, a file containing copyrighted work X is less likely to satisfy de minimis the more of these it meets:

Note: de minimis consideration applies to a specific image composition. Significant cropping to focus on the copyrighted work can very easily turn a "probably OK" into a "probably not OK".

It is the first of these that is often of particular concern on Commons.

As found in Ets-Hokin v. Skyy Spirits, Inc., a photograph of a bottle is not a derivative work of its label (though in this particular case, the label also happened to be below the threshold of originality):

Art. XI.190 of the Code on Economic Law states:

The Copyright Directive (Directive 2001/29/EC of the European Parliament and of the Council of 22 May 2001 on the harmonisation of certain aspects of copyright and related rights in the information society allows for de minimis exception in Art. 5(3)(i):[1]

Under the generic conditions of Article 5(5):

This photograph is not a copyright violation since it is of the entire plaza, and not just the Louvre Pyramid.

The white triangle in this derivative work covers the copyright protected region of the top image.

French case law states that the said artwork must not be intentionally included as an element of the setting: its presence in the picture must be unavoidable (CA Versailles, 26 janvier 1998, Sté Movie box c/ Spadem et a.):

Under § 57 of the 1965 Act on Copyright and Related Rights (Gesetz über Urheberrecht und verwandte Schutzrechte) (UrhG), "any reproduction, distribution, and communication in public of a work shall be admissible if the work is to be regarded as an immaterial supplement in comparison to the actual subject matter of the reproduction, distribution, or communication in public."

According to the Federal Court of Justice, this is the case

The Federal Court of Justice also provided a (non-exhaustive) list of examples where it is "regularly impossible" that the use of a work qualifies as de minimis:

Note that whether the work can be replaced with another work is relevant only to the extent that if an average observer of the primary subject matter would not notice the work in question because it can be arbitrarily replaced or omitted, this supports a finding of immateriality (see above). However, as soon as it has been established that the work is part of the overall concept (say, because it impacts the mood of the picture), it no longer matters if the work could be replaced: Section 57 does not apply.[9]

Examples of de minimis use from court cases:[10]

There are very few court decisions discussing the German de minimis provision and the 2014 decision by the Federal Court of Justice, which set out the tests expounded above, was the first by Germany's highest court of civil jurisprudence that revolved around § 57.[11] In the case at issue, the Court looked at a photograph in a furniture catalogue depicting several furniture items for sale and a painting on the wall in the background (pictured here, p 3). The Court held that the publisher could not rely on § 57 for its use of the painting after the lower court found that the painting added a "markedly contrasting colour accent". The Court deemed this sufficient to rule out an immaterial use pursuant to § 57. In another decision, the Federal Court of Justice held that the use of a picture of a Spanish city as part of a high-school student's essay on that city does not qualify as de minimis.[12]

In light of the 2014 judgement, older decisions by lower courts will need to be viewed with some caution. That being said, the use of a photograph of an individual wearing a T-shirt with a protected design on the cover page of a magazine (pictured here) was held by the Munich Higher Regional Court in 2008 to fall within the definition of use as an immaterial supplement because the design did not bear any contextual relationship to the primary subject matter due to its randomness and arbitrariness.[13]

An unofficial translation of Article 10a of the Icelandic copyright act reads:

According to Pascal Kamina, the Irish legislation is similar to the legislation in the United Kingdom from 1988.[14]

The law of the Netherlands includes an article devoted to a situation where the copyright is not or barely relevant. This is called de minimus or bagatel. Based on this article, it is allowed to include work of other persons in an own work, but only if it is incidental or of minor significance. "Incidental" means that the presence of the copyrighted work is more or less by chance. Of minor significance means the copyrighted work is a small part of the work.

Translated text from Art.18 of the Auteurswet of the Netherlands:

The incidental processing of a copyrighted work as a part of minor significance in another work is not considered an infringement of the copyright of the first mentioned work.

"It shall be permitted, without the author’s authorization or payment of a fee, to republish, broadcast or communicate to the public by cable an image of a work of architecture, a work of fine art, a photographic work, or a work of applied art which is permanently located in a place open to the public, unless the image of the work is the main subject of such a reproduction, broadcast or communication and if it is used for commercial purposes".[1-05-192/2006 Art.20]

There is subtle mention of "de minimis" in determinate cases:

Therefore, acts done in relation to insubstantial parts of a work or other subject-matter do not breach copyright.

Article 52 of the Copyright and Related Rights Act:

Article 52 has been interpreted by the copyright expert Miha Trampuž in his book Copyright and Related Rights Act with Commentary. He has highlighted the following aspects: the work must have been disclosed, it must have been incidental with another object or work, it could be at will replaced with another work, and it is inessential in the copyright sense to the object or work.[19]

This photo is not copyright infringement because Lotte World Tower is not main object in this image, it's incidentally included.

Article 35-3 (Incidental Inclusion, etc.),
A work seen or heard in the courses of photographing, voice recording, or video recording (hereinafter referred to as "shooting, etc." in this Article), where it is incidentally included in the main object of shooting, etc., may be reproduced, distributed, performed in public, displayed, or publicly transmited. That where it unreasonably prejudices the interest of the holder of author's economic right in light of the type and nature of the used work, the purpose and character of use, etc, the same shall not apply.

Section 31 of the UK Copyright, Designs and patents Act 1988, as subsequently amended in 2003, states that:

"Artistic work", as defined within the act, includes photographs.

Since an image which is allowable under the de minimis principle must of necessity include some copyright material, it follows that such images cannot be cropped at will. For the case of a photograph which includes a poster, even if the photographer has a defence against infringement on the de minimis principle, that does not negate the original poster-designer's copyright. If someone takes the photograph and crops it so that only the poster remains, the de minimis defence is no longer available, as the poster design then becomes an essential part of the crop. So, the cropped version infringes and cannot be allowed on Commons.

Note that the mere fact that an image allowable under de minimis may be cropped to create one which is not allowable does not imply that the original work is not de minimis after all. Even very high resolution images, in which incidental details can be reliably recovered and magnified, should be viewed as a whole from a normal viewing distance when considering whether de minimis applies.